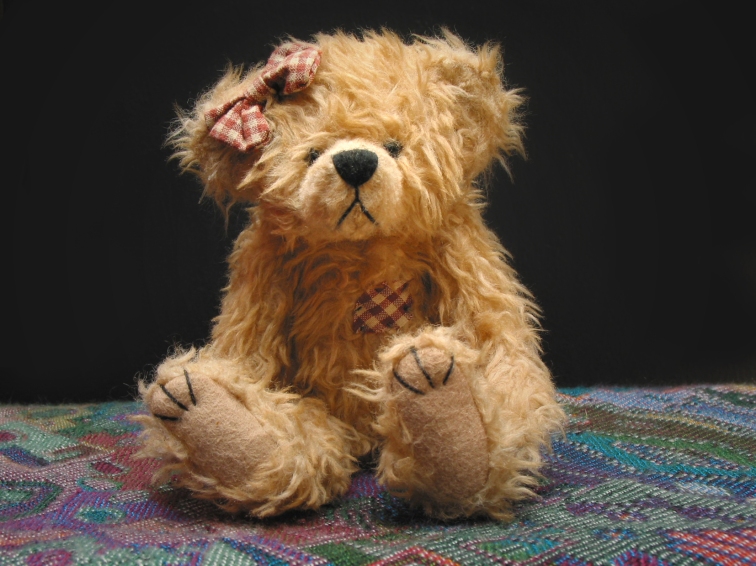 Describe an item you were incredibly attached to as a child. What became of it?

We had woken up early through that incredible sixth sense that all children seem to possess, at around six o’clock in the morning. There, at the end of each of our beds was a bulging, hessian sack, filled to overflowing with a multitude of mysterious shapes lovingly wrapped in varying brightly coloured papers.

On the top of my sack sat the most beautiful teddy bear I have ever seen. It had long golden fur, two shiny brown eyes, and a neat little cotton stitched black nose in the shape of an inverted triangle. Two drooping arcs curved away from the bottom of the nose, lending my bear a slightly sad expression that made you want to kiss it better. I hugged him hard, for him he now was, squidging his deliciously soft body against me.

From that moment on I was besotted with my bear. Me and Golden Ted were inseparable. I slept with him, played with him, muddied him and cried when Mum washed him. I would constantly squeeze his arms to check if he was dry enough to leave his spot on the washing line or radiator, and return to my desperate arms.

As I grew older, inevitably I played with Golden Ted less, but he was still quietly adored. He eventually left my bed for a place on my wardrobe, where I could still see him. Years passed and I became a young man, and at eighteen years old, I left my parents’ house to start my independent life. Unwilling to take him with me, but unable to part with him, I left Golden Ted behind, safely stored away in a cupboard with a few other precious items.

Golden Ted had become little more than a fond memory by the time my own children had begun to grow large enough to explore my parents house, and I was taken completely by surprise when my daughter came running into my parents’ lounge, proudly clutching my beautiful Golden Ted.

“Where did you get that?” I demanded, instinctively retrieving my furry friend from my daughter’s hands.

“I found it in the cupboard! It’s mine! Give it back!” she screamed. Everyone was looking at me as I held my precious bear above my head, and out of the reach of my jumping daughter’s hands. My heart sank. I knew in that moment that Golden Ted was no longer mine. They are not ours to keep as the saying goes.

I surrendered my bear to my daughter who ran off laughing excitedly. There were many battles in our house after that, as both the children sought to lay claim to Golden Ted. Once, they fought so hard that they almost tore an arm off and I had to repair him with stitches. I used that as an excuse to withhold Golden Ted from them for a while, eventually giving in to the tears and the tantrums.

Golden Ted started fights wherever he went. Another child would see him, and would quickly fall under his spell – my precious! we wants it, we wants it! I had to watch him very carefully, and tried to persuade my daughter from taking him anywhere I considered high risk. “What if someone tries to steal him?” I would say, to sow the seeds of doubt in my daughter’s impressionable young mind.

“Then I won’t let go of him,”  she would stubbornly say, her nose set high in the air in finality and defiance. Just as I had before her, she carried Golden Ted everywhere. It was this need to be with him, and the power he exerted over all who beheld him that was to prove our final, fateful undoing.

We had gone to see some relatives on a housing estate in Ferndown, and the children had gone to the park to play with their cousins. They had been out for no more than ten minutes when my daughter burst into the house crying hysterically.

“What happened?” I said, checking her for injuries.

“She took him. She took my Golden Ted!”

“Who did?” I asked, panic rising within me.

“The big g-girl.” She sobbed, her hot wet face buried in my legs.

I took a posse of six adults and left at once for the play area, on a mission to recover Golden Ted from the mysterious ‘big girl’. When we arrived she had already left, and no-one knew who she was, or where she had come from. I felt like I had been punched in the stomach when I wasn’t looking, and didn’t know who to blame.

There is no happy ending to this one. No lucky reunion in a jumble sale. No guilty or anonymous return of the bearnap victim.  I never saw Golden Ted again, and it still bugs the hell out of me. The only shred of comfort I draw from this story is the certain knowledge that wherever he may be, whatever lucky child is snuggling up to my Golden Ted; at least he is loved.

I miss you Golden Ted. 😦