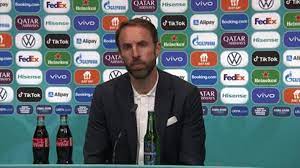 With a Wembley fixture, an expectant crowd and weather the players are accustomed to, England contrived to squander the benefits of home advantage in a fixture that underlined the constraints preventing this talented group from achieving greatness on the international stage.

Southgate’s men showed some early promise, particularly through the craft and guile of Foden, before fading into the predictable patterns of play and lack of courage in their own ability that continues to hold them back.

The industry, link up play and quality that won Kalvin Phillips plaudits in the first match was missing in this second tournament outing and without it the team looked bereft of ideas.

Southgate’s continued faith in Harry Kane, anonymous against Croatia and invisible tonight, must lead the manager’s staunchest fans to question his ability to adapt in-game in time to affect its outcome. It could be argued that his over-reliance on Kane in Moscow was one of the reasons for England’s inability to overcome the Croatians in the semi-final defeat, as he continued to overlook the talents of the in-form Jamie Vardy, while a sluggish and obviously injured Kane stumbled through a game that he was unable to influence.

England’s build-up tonight was slow and risk-averse, particularly on the right flank, where Reece James was one of two changes Southgate made for what should have been seen as a very winnable game. For Chelsea, James displays a great balance between attacking intent and competent defending, yet in a game that should be seen as an easier fixture than the opening game, James appeared to lack the confidence to pass the ball forward or attempt a telling cross.

Poor as England were, Scotland excelled. Their organisation in defence and energy in pressing England, cheered on by a buoyant support, saw them first to most of the second balls, and their midfield distribution was unquestionably superior. Time and again they were allowed too much space and time on the ball by an England team that seemed unwilling to engage them.

It will have been of no surprise to most England fans watching, that Scotland were allowed the opportunity to deliver a number of testing crosses into the England penalty area, that but for the excellence of Jordan Pickford in goal and the lack of quality finishing, England could well have found themselves on the wrong end of a humiliating defeat.

Southgate eventually brought Grealish on in the 63rd minute, but incredibly, the player he took off was England’s most potent attacking force up to that point – Phil Foden. Kane was belatedly hooked for Rashford on 73 minutes but ultimately, all was in vain.

England face the Czech Republic in their final game and the surprise group leaders will not be overawed by anything they have seen from Southgate’s men. With four points from two games, England will probably advance, limping over the line into the last sixteen where their tactical limitations will almost certainly be exposed and exploited by wilier and more dangerous teams.

If England are to progress in this competition Southgate must ditch his caution-first approach and unlock the abundance of creative talent at his disposal. He must think the unthinkable and drop Harry Kane.

There is an abundance of potential goal-scorers in this team and Southgate shouldn’t be afraid to drop a player who isn’t affecting the game, no matter who he is. With three points in the group already this was the perfect opportunity to take the handbrake off. Why not consider playing Foden in the false number nine position? He has already shown he can take this responsibility for Pep Guardiola at Manchester City this season. Give the England fans something to really get excited about and drop one of the defensive midfielders.

Imagine what this side might achieve with the following line-up:

Of course, the cautious England manager is unlikely to attempt such a bold statement of intent, and the team are ultimately made in his image. Southgate’s reticence risks squandering one of the most potent attacking forces in this competition and is at odds with the maxim of ‘playing to your strengths’. Surely now, the time has come to put trust in his players to play each game with determination to win, instead of with a fear of losing.